A Day in the Life 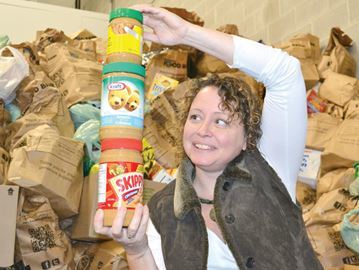 Friday, October 16, morning: We are right in the middle of our Thanksgiving Food Drive. During the previous week, we collected and sorted 70,000 lbs of food. In the next 6 days, we will collect 35,000 more and are planning on having another food sort with 40 volunteers on Saturday. I spent the morning in the warehouse setting up our system of sorting tables and labelling boxes for the next day. It was a busy morning as we were working around incoming food, volunteers and staff stocking shelves for clients who will be in to collect grocery orders this afternoon. To add to the buzz, the Morning Drop-in that generally sees around 80 people in 3 hours is operating in an adjoining room.

Friday, October 16, afternoon: Our afternoon program consists of individuals and families who apply for a food order that generally will last between 2-3 weeks. Clients bring in paper work that validates their address and family members, allowing us to compare their income to expenses. These one-on-one interviews are friendly and private. Sometimes they are quick and routine; other times, people want to talk. Our qualified staff and volunteers are willing to listen so it is a wonderful opportunity to give direction and referrals to other resources, as well as emotional support and comfort. Hurting people need company!

People come from varying backgrounds and education levels. Some are ill, injured or just finding themselves in a difficult place with a lack of income. This afternoon we processed orders for 51 families, which is about average. Sometimes we have numbers reaching over 100, such as the previous Friday (right before Thanksgiving). Of these 51 orders today, 9 families are visiting our food bank for the first time. This represents a total of 237 people benefitting from our food bank, including 97 children.

I’d like to share a couple of actual interviews that I had  today: “R”, the first client I spoke with, had never been here before. Through a series of unfortunate events, he had lost his housing and was going to move for a fresh start. He needed food for the next couple of weeks. Because of his unique situation, I did not start a formal file for him but made a detailed list of items that would be manageable and portable. The interview was lively and somewhat erratic due to his condition. To add to his situation, he was in a lot of pain and had limited mobility in his arm, for which I offered to pray. Immediately his pain level dramatically decreased and the mobility range of his arm doubled! He said he felt a lot better as he moved his arm about. He was noticeably more peaceful and his breathing slowed. He was thankful and content to go on his way, equipped with provisions and feeling so much better physically as well as emotionally. May God continue to work in his life in every way! What God begins, He completes.

My second interview was with “J” who works in the medical field. His life was being sabotaged by rash decisions. The underlying issue was that he had sustained a brain injury 10 years before. We had a good long chat about the supports that had once been in his life as he was learning to function with his disability. One by one he had let go of these supports, convincing himself that he was fine and wanting to be independent. We had a detailed talk about all of the supports he could put back in place. Because of memory issues, I wrote down everyone he needed to reconnect with and helped him form an action plan giving him a foundation from which to move forward. It was so wonderful to see someone go from being tossed about in a crisis, to the realization that what he’s doing is “just not working”, to having a plan on paper clutched in his hand. It is his life and now he had a lot more control and direction. Hope abounded and a relaxed smile was seen on his face. Plus he went home with groceries.

“S” is a licensed professional. Being laid off because of seasonal contracts was causing him to be swallowed up in discouragement. While looking him straight in the eye, I had a conversation with him that I have had with a countless number of people that sounds a bit like this: “Your experience, although horrible, is not the same thing as your identity. Someone helping you is just kindness. It does not make you worthless or a failure.” Sometimes circumstances are crushing and can cause even the most strong-minded of us to lose perspective. It is one of my favourite things to help people regain a thought pattern that includes self-kindness. I encouraged him to keep on reaching out for the help he needs. He went home with his food feeling, as he said, “much better about my situation.”

“R” works in the computer field. He has had a period of patchy employment and is not used to needing help. Because of this he was unaware of resources. We had a good brain-storming session about what help is available and strategies he could take. I firmly encouraged R. in much the same way I had talked to S. A well repeated phrase I use is “kind thoughts, kind actions toward yourself.” We talked about keeping helpful doors open and closing doors that are toxic. He left with food for his stomach and encouragement for his heart.

Close to 30% of the people using the food bank are single parents. “L” is raising her two children on her own, struggling with an illness while her income is being sabotaged by her children’s father. L. is tired and frustrated. All I could do was listen and give her a loving place to vent. If I can reflect back to her the insanity of the situation, she can know, all the better, that she’s not losing her mind. We can help her through her crisis with grace and food. I took note of her name and will later offer to sponsor her in our Christmas adoption program. It would be nice to see this family finish the year on a happy note.

I was thrilled to see “J” again in my last interview of the day. She was excited to tell me about everything that had happened in the last month. When I met J. she had just left an abusive relationship. We had a long talk about good head-space thinking and all of the resources and strategies she could take to secure her safety and future. Now there has been an enormous transformation. Drugs had been part of the abuse, but she has gone through detox and is aggressively participating in a drug rehab program. She is doing everything she should do. In the process, J. has gone from crushed and in shock, to totally empowered and healing. It’s amazing to watch people take a seed of encouragement and use it to blossom and grow. I am so proud of her.

My job is to love people by reaching in and grabbing them by their true identities. Recently I was talking about our clients to a woman from the food distribution agency. She remarked how, after all this time that I have been working here, that I remain passionate and do not get burnt-out. My response to this: “if I pitied people and was trying to fill an endless need I would burn out. Giving compassion and empowering people is life giving to them and to me. It is through this that they learn to see themselves as the conquerors and victors that they are.”