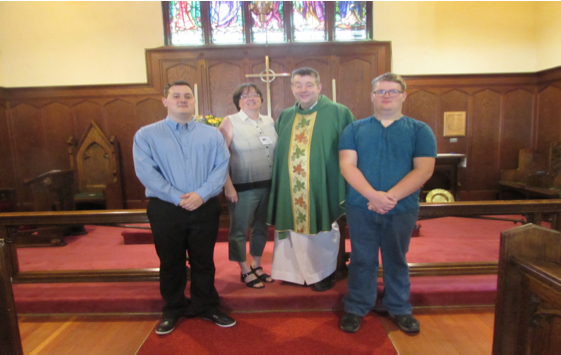 Jason Haggstrom, commissioned in 1991, has recently been called to Peace River, AB from Prince Ruprt, BC to serve as the Dean of Athabasca and Rector of St. James' Cathedral.

Jason, his wife of 23 years, Nova, and their two sons moved across the mountains from Prince Rupert, BC in late August 2017. “It has been a few weeks now since we came to Peace River and began the process of settling into life in town”, Jason commented. “The boxes are mostly cleared away from the house and a few parishioners are even making good use of them, for a move of their own.” He continued, “we’ve received such a gracious welcome from our new community. Our boys (Joshua, 21 and Aaron, 15) have marveled at the welcome we have received from the St. James family and from the Diocese of Athabasca.”

Jason has been in full time ministry for the past 26 years. The first 16 years of his ministry were spent with Threshold Ministries in Ontario, in the Yukon and in Western Newfoundland. Then, having sought further education, he earned a theological degree in 2007, and was subsequently ordained Deacon and Priest that same year. In 2011, the Haggstrom family moved west from Western Newfoundland to Prince Rupert and the Diocese of Caledonia, where Jason served as Rector of St.Andrew’s Cathedral and Dean of Caledonia for the past 6 years.

"I am a parish priest in a community of about 6700 people. I spend my time teaching the scriptures, in prayer both public and in private and in leading worship. Our parish participates in the local Soup Kitchen which is held here three times a week and supports the local Food Bank with regular donations. There are lots of opportunities in the community to preach and to share Christ in the retirement and nursing homes. In the Diocese, I assist the Bishop with administration and other like matters. As Dean I am a senior counselor to and a confidante the Bishop along with the Archdeacon. With the Regional Deans, we are pastoral care givers for the clergy. I sit on the Management Committee and the Diocesan Executive Council to assist in the leadership of the Diocese. I am the Chair of the Matrimonial Commission in the Diocese. I spend a lot of my time enabling others to do ministry which in and of itself is an important ministry."

Athabasca, while in the Council of the North, does not have a large ministry to the First Nations. The influence of the First Nations (Cree) there is relatively muted. That has taken some adjusting for Haggstrom after Life in Caledonia and Prince Rupert where such things were very prominent. "One was expected to abide by the customs of the First Nations and to follow their lead. There is none of that here," noted Jason.
Commenting further on some of the differences between his previous and new home, he says: "I was also warned that there is no ocean here in the Peace. The prairies are like and remind me of the ocean. But is is interesting driving along at night on the prairie, with the Northern Lights dancing and passing communities from far away that look close because of the lights. It is an adjustment from the mountains of my home province but not an impossible one."
The Haggstroms are continuing to adjust to their new home and community, but Jason is certain that “each and all of us are very excited about the days ahead and the things that God is going to do amongst us.”
Jason is looking forward to a trip in mid December to their companion Diocese of Ibba, South Sudan. They are raising funds and makings plans to visit and encourage their companion diocese and to be a part of celebrating their consecrating of a new Cathedral.  "I want to learn what they are doing to draw people into the Church, especially the younger people and how they are raising people up for ministry. I am hoping that we can build each other up," Haggstrom commented. "They have 51 clergy, most of whom have not been further than grade school (primary), and so how they do ministry and learn to preach is very different from our system of education and church life." Bishop Wilson Kamani, Ibba's Bishop, visited Athabasca in October.