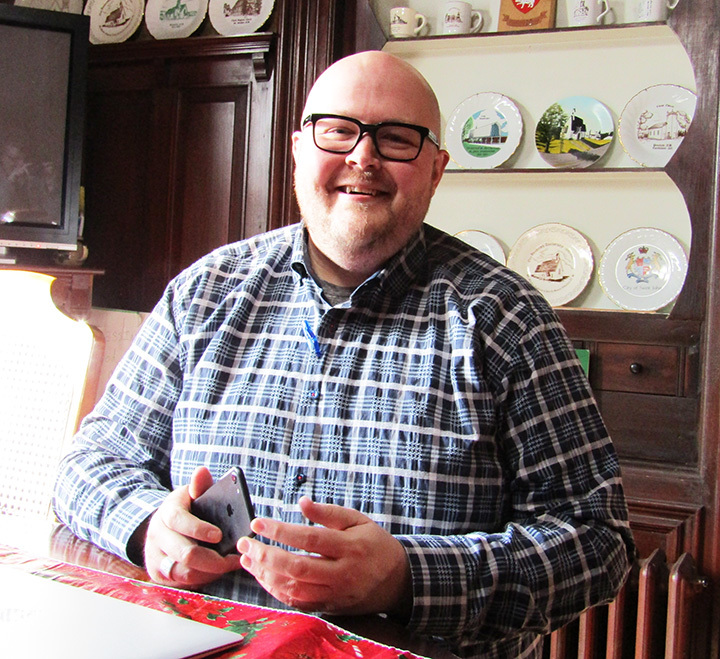 What happens when your plans are all made and then God says no? You change your plans.

That’s what happened to Shawn Branch last fall when he was offered a job as executive assistant to the Bishop of the Diocese of the Arctic. Shawn, the former national director of Threshold Ministries, gave his notice and prepared to move from Saint John to Yellowknife.

“About a month after I said yes, I kept praying about it and the only way I can describe it is I had a stirring from God to re-discern,” said Shawn.

“I went from having peace to not having peace. When I prayed, the word ‘stop’ came to mind.”

Shawn is thankful for the good people God put in his path who, he says, prayed and “worried for me.” They even thought he might be having a mid-life crisis, though Shawn was not worried at all.

He turned down the Diocese of the Arctic, but still felt it was right to leave Threshold Ministries, where his entire career had been forged.

That stirring from God, that lack of peace has led to Shawn being hired as the diocesan parish development officer, a post held by Dr. Ken Neilson until last November. Shawn began work Jan. 2.

Last fall he and Bishop David Edwards had a casual conversation about the job opening, but it was when he saw the job posting that he felt he was heading in the right direction.

“What pushed it over the edge for me was hearing and seeing the vision,” he said. “I thought, ‘I can get behind this.’”

He caught a glimpse of that vision at Diocesan Synod in November when he hosted the BELLS presentation. BELLS stands for Bless, Eat, Listen, Learn, Sent and forms the basis of a book called Surprise the World: The Five Habits of Highly Missional People, by Michael Frost.

“One of the things David has asked me to look at is the BELLS approach and how that can be implemented in the diocese,” he said.

Shawn is also looking forward to what he loves most about ministry: connecting with parishes, helping people realize their gifts, helping churches become a blessing to their communities — all of which fits quite well with the BELLS model.

His first goal is going to involve a lot of travel.

“One of the things I’d like to do is meet with as much of the leadership in the diocese as possible and hear their stories and see where their heart is,” he said. “There’s no one target that will fit all. Within that it’s coming up with what God’s already doing. He’s already working. We just need to pull the blinders off.”

Shawn’s education and experiences have shaped his skills for the job. A graduate of Fredericton High School, he spent three years at St. Thomas University before he could no longer ignore God’s call. He ended up studying at Threshold Ministries for three years and was commissioned in 2004. He spent three years working with youth in the Diocese of Saskatchewan before being asked to come back to Saint John and work at Threshold’s national office. He worked in communications, as assistant director, acting director, and since 2012, as the national director. He is almost finished a masters of ministry de-gree from St. Stephen’s University.

Bishop David is glad to see the position filled and to have Shawn’s experience at work for the diocese.

“I’m pleased to have Shawn as part of the team,” he said. “He brings new ideas to parish development in the diocese and brings experience from his previous ministry which involved his working across Canada.”

For now, Shawn, 37, will work at the Synod Office and from home in Saint John, with a lot of time devoted to travel in the diocese.

“I’d like to spend most of my time on the ground with people,” he said.

You can reach Shawn by email: sbranch@diofton.ca